You are here: Home1 / Level Four 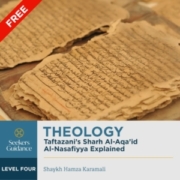 This is a series of courses that unpack the questions (masa’il) of Taftazani’s pithy Sharh al-’Aqa’id al-Nasafiyya, arguably the most important textbook ever written  in the science of Islamic theology. These courses explain the intellectual context in which the book’s questions are set, and then apply those questions to contemporary theological problems, with a special focus on modern science and occasional digressions into Western philosophy. Take this course to to understand what the science of kalam is; the historical circumstances that led to its development; who the Mu’tazilites were and why they are important; who the falasifa were and why they are important; what philosophical skepticism is, what motivates it, its relevance to kalam, and how it should be tackled; what human knowledge is and how to distinguish truth from falsehood; the epistemological value of sensation, rational inference, historical transmission, and revelation; and the relation of all of these topics to non-religious historical accounts of Islamic theology, cognitive psychology, and evolutionary accounts of human development.

This is a Level Four Course

What You Will Learn:

About the Course Text

For centuries, Taftazani’s Sharh al-’Aqa’id has been a standard and indispensable part of curricula in traditional institutions of learning all over the Muslim world. No other textbook in any of the Islamic sciences has as many scholarly glosses (hawashi) as it does. The importance of a textbook can be judged by the number of glosses that have been written on it. The innumerable glosses on Sharh al-’Aqa’id by scholars in the Ottoman Empire, in al-Azhar, in the Indian Subcontinent, and elsewhere make it the most important textbook of Islamic theology ever written.